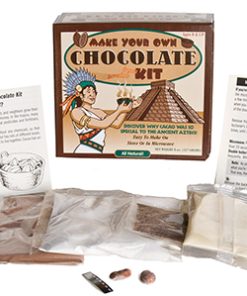 Make Your Own Chocolate Kit

Mixing elements of chemistry with world culture and history, the Make Your Own Chocolate Kit contains everything you need to make decadent, dark chocolate, right at home.

Each Chocolate Kit makes 8 oz. of chocolate, or about 20 pieces

Mixing elements of chemistry with world culture and history, the Make Your Own Chocolate Kit contains everything you need to make decadent, dark chocolate, right at home.

Can be made on the stove or with a microwave – adult supervision is recommended! Great for class room activities, scout troops, birthday parties, home school, or after school. Makes a great gift for kids (ages 8 & up)!

First you melt the cocoa butter, then add the cocoa powder and sugar. Stir, stir, stir until it cools to the right temperature. Add the starter crystals so that the chocolate “tempers,” and enjoy your delicious, home-made chocolate!

A fun activity for classrooms, scout troops, birthday parties, home schools, date nights, and more. A great gift for kids (ages 8 & up) and chocolate lovers of all ages! Adult supervision is recommended.

Want to See the Make Your Own Chocolate Kit in Action?

Watch our friends from the Lucky Penny Shop give it a try. This popular popular video shows the process from start to finish.

The Legend Of Chocolate

Chocolate comes from cacao beans which were originally found only in Central and South America.

Cacao was so special to the ancient Aztecs that they told this legend: Their god, Quetzalcoatl, brought the cacao tree from Paradise to earth, traveling on a beam of the Morning Star. He gave the tree as an offering to the people, and they learned how to roast and grind its beans into a paste. They added spices and mixed it with water calling it “xocolatl” or “bitterwater”. They believed that it brought wisdom and knowledge to those who drank it.

Today, cacao is an important part of agriculture in the tropics all around the world. The legend of chocolate lives on!

What Does the Chocolate Kit Have to Do with Our World? Lucía’s Story

Lucía lives in a hot and rainy part of Costa Rica. Her parents and neighbors grow their own food to eat, and they also grow some crops to make money. In the tropics, many crops are grown on large plantations with lots of chemical pesticides and fertilizers, which can hurt other plants and animals in the area.

But here, people are tending cacao trees organically, without any chemicals, so that they can keep their forest green and productive. A healthy forest has lots of different levels, which makes it possible for many different animals and plants to live together. Cacao has an important role to play because it is an understory tree, which means that it grows in the shade of taller trees.

Lucía helps to take care of the cacao trees and harvest the pods. She breaks open the pods, and puts the beans into big, burlap bags so that they can ferment for three days. Then, she spreads the beans out onto a cloth on the ground, and lets them dry in the hot sun for a week. When the beans are ready, she goes with her father to sell them. They get paid extra because they are growing organically.

Meanwhile, far across the ocean, the cacao is made into chocolate. When we buy candy bars, part of the money goes to pay for the shipping, part for processing, the candy wrappers, the advertising, the store owner, and lots of other stuff. Lucía’s family really gets only a small part of the price we pay for chocolate.

Chocolate as we know it has only become available in the last 100 years or so, even though cacao beans had been growing in Central and South America for a long time. When the Spanish explorers came to Mexico in the 1500s, they found the Aztecs drinking “xocolatl” (pronounced “ho-ko-la-tol”), made from cacao beans, water, and sometimes, spicy peppers. Montezuma, the last king of the Aztecs, was known to have drunk 50 pitchers a day! The Spanish brought it back to Europe, but since they found it too bitter, they added vanilla and sugar. They wouldn’t let anyone in Europe know how or where it grew, and guarded their secret for about 100 years, growing it on plantations in their colonies.

You have to remember that there weren’t a lot of different drinks available then, as there are now. So eventually, when other people did find out about it, drinking chocolate became a very fashionable thing to do. Fancy clubs just for drinking hot chocolate were opened.

It really didn’t taste that great, however, because cacao beans are about 50% fat. Chocolate became much better when, about 150 years ago, the Dutch chemist, Conrad Van Houten, invented the chocolate press. Then people could separate cocoa butter, the fatty part of cacao, from cocoa powder and, in turn, make hot chocolate and chocolate candy as we know it today.

Today, the huge demand for chocolate has turned cacao into an important cash crop worldwide. We hope, by including organic cacao in our Chocolate Kit, that we can help make it possible for both Lucía’s family and the forest to keep flourishing. 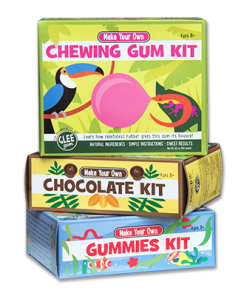 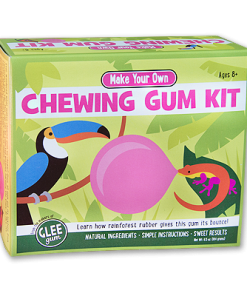 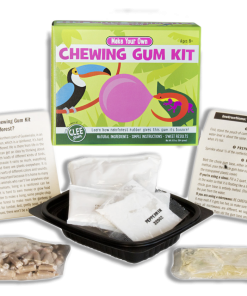 Make Your Own Chewing Gum Kit 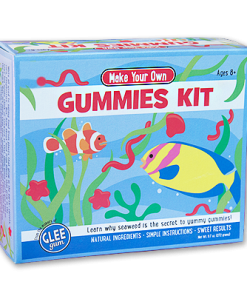 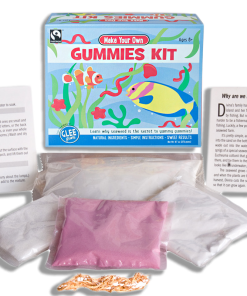 Make Your Own Gummies Kit 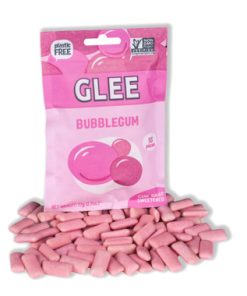 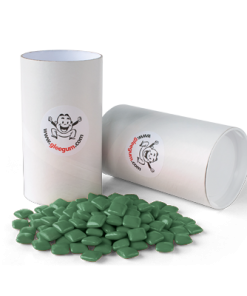 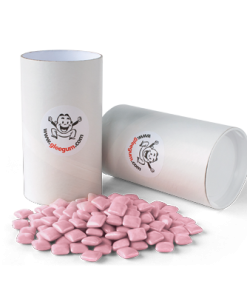 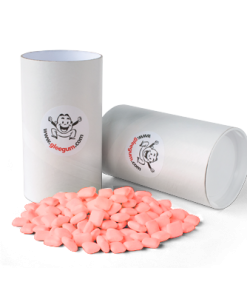 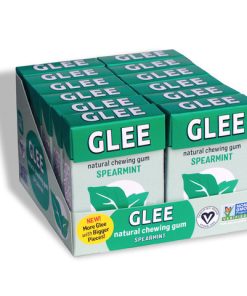 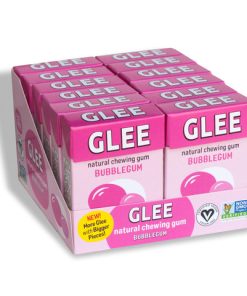 Epilepsy Safe Mode
Dampens color and removes blinks
This mode enables people with epilepsy to use the website safely by eliminating the risk of seizures that result from flashing or blinking animations and risky color combinations.
Visually Impaired Mode
Improves website's visuals
This mode adjusts the website for the convenience of users with visual impairments such as Degrading Eyesight, Tunnel Vision, Cataract, Glaucoma, and others.
Cognitive Disability Mode
Helps to focus on specific content
This mode provides different assistive options to help users with cognitive impairments such as Dyslexia, Autism, CVA, and others, to focus on the essential elements of the website more easily.
ADHD Friendly Mode
Reduces distractions and improve focus
This mode helps users with ADHD and Neurodevelopmental disorders to read, browse, and focus on the main website elements more easily while significantly reducing distractions.
Blindness Mode
Allows using the site with your screen-reader
This mode configures the website to be compatible with screen-readers such as JAWS, NVDA, VoiceOver, and TalkBack. A screen-reader is software for blind users that is installed on a computer and smartphone, and websites must be compatible with it.

Glee Gum strives to ensure that its services are accessible to people with disabilities.

We firmly believe that the internet should be available and accessible to anyone, and are committed to providing a website that is accessible to the widest possible audience, regardless of circumstance and ability. To fulfill this, we aim to adhere as strictly as possible to the World Wide Web Consortium’s (W3C) Web Content Accessibility Guidelines 2.1 (WCAG 2.1) at the AA level. These guidelines explain how to make web content accessible to people with a wide array of disabilities. Complying with those guidelines helps us ensure that the website is accessible to all people: blind people, people with motor impairments, visual impairment, cognitive disabilities, and more.

Glee Gum uses a Website Accessibility Widget that has a dedicated accessibility functionality. Our website utilizes various technologies that are meant to make it as accessible as possible at all times. We utilize an accessibility interface that allows persons with specific disabilities to adjust the website’s UI (user interface) and design it to their personal needs. Additionally, we utilize an AI-based application that runs in the background and optimizes its accessibility level constantly. This application remediates the website’s HTML, adapts Its functionality and behavior for screen-readers used by the blind users, and for keyboard functions used by individuals with motor impairments. The software allows Glee Gum to improve its compliance with the Web Content Accessibility Guidelines (WCAG 2.1). If you’ve found a malfunction or have ideas for improvement, we’ll be happy to hear from you. You can reach out to the website’s operators by using the following email info@gleegum.com.

Our website implements the ARIA attributes (Accessible Rich Internet Applications) technique, alongside various different behavioral changes, to ensure blind users visiting with screen-readers are able to read, comprehend, and enjoy the website’s functions. As soon as a user with a screen-reader enters your site, they immediately receive a prompt to enter the Screen-Reader Profile so they can browse and operate your site effectively. Here’s how our website covers some of the most important screen-reader requirements, alongside console screenshots of code examples:

We aim to support the widest array of browsers and assistive technologies as possible, so our users can choose the best fitting tools for them, with as few limitations as possible. Therefore, we have worked very hard to be able to support all major systems that comprise over 95% of the user market share including Google Chrome, Mozilla Firefox, Apple Safari, Opera and Microsoft Edge, JAWS and NVDA (screen readers), both for Windows and for MAC users.

We continue our efforts to constantly improve the accessibility of our site and services in the belief that it is our collective moral obligation to use reasonable efforts toward improving seamless, accessible and unhindered use also for those of us with disabilities to the extent this can be done in a reasonable manner. Despite our very best efforts to allow anybody to adjust the website to their needs, there may still be pages or sections that are not fully accessible, are in the process of becoming accessible, or are lacking an adequate technological solution to make them fully accessible. We are continually working on improving the accessibility of our website by adding, updating and improving its options and features, and developing and adopting new technologies. We do all this because we constantly strive to achieve the optimal level of accessibility possible.

Despite our efforts to make all pages and content on this website as reasonably accessible as it can be consistent with normal business practices for a company of our size and resources, some content could still be improved, so we welcome your suggestions. If you are experiencing any difficulties in accessing or navigating, any content or part of our website, if you are blind or if you have visual impairments, or if you require any kind of assistance, please contact us and let us know. We will be happy to assist. For any assistance, please either call or email. Phone: +14013516415 Email: info@gleegum.com