Rooting for the Rainforest

Picture yourself walking through a lush green forest. The heat is intense; sweat beads up on your skin and trickles down your back. Moisture is everywhere— dripping off the leaves, forming pools on the forest floor, and creating a mist in the air. The ground is soft and spongy, covered with decaying leaves and branches. The silence is occasionally broken by the buzz of an insect or the trill of a bird— none of the howls and grunts you’d expect from a Tarzan movie! 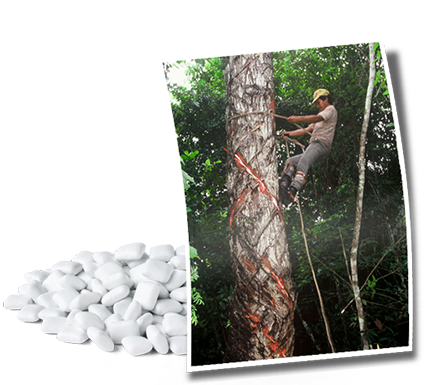 This verdant and serene place is the rainforest, and its quiet is deceptive— it teems with a greater diversity of life than anywhere else on the planet. Biologists estimate that just one hectare (about 2.5 acres) of the rainforest along the Rio Dulce in Guatemala, for example, contains around 250,000 species! These include rare animals like the jaguar, tapir, iguana and scarlet macaw.

The largest remaining tropical forest on the continent of North America lies in the six million acre Peten region of northern Guatemala and southern Mexico. Next to the Amazon, the Peten is the largest tropical rainforest in the Americas. Sapodilla trees are found in the forests of the Peten. These trees produce a sticky sap called chicle, the original substance from which all chewing gum was once made— and the basis for the chewy texture of Glee Gum!

The ecological stability of the Peten is severely threatened by increased development in the region. Outsiders are attracted by the natural beauty and by the potential for commercial exploitation of the natural resources there. But the increased population and infrastructure are contributing to serious regional deforestation. Although rainforest soil is rich and productive, it is not good farmland. That’s because in the rainforest, the good topsoil only extends downward about 12 inches. After that, the ground becomes impermeable clay.

The Maya, indigenous people who for centuries have lived in and depended upon the forest for sustenance, developed successful adaptive techniques for growing food. Unfortunately, their traditional way of life is being abandoned, replaced instead by the destructive techniques of monoculture and cattle raising.

To illustrate the difference between rainforest soil and farmland, consider this: when you look at a crop growing on good farmland, the crop is only a small fraction of the biomass in the system. Far more biomass lies buried in the soil down to a depth of several feet. In contrast, when you look at the trees in a rainforest, you are looking directly at most of the biomass. It is all up in the air, and very little is in the soil.

Only the top few inches of rainforest soil is fertile. When the forest is clear-cut or burned to plant food crops, the remaining soil can only function for a season or two before it is depleted. Once the rainforest is cleared off, the soil is exposed to the direct sun; the sun destroys the bacteria and fungi, leaving just the meager nutrients in the top few inches of soil in which very little can grow. The heavy rains will wash away the remaining topsoil if there are no roots to hold it in place. The land is left practically unusable, barren where it was once teeming with life.

In addition to the conversion of rainforest to cropland, increased tourism and the extraction of natural resources (such as timber) have led to major construction and infrastructure projects which continuously threaten the natural ecological balance needed for such rich biodiversity. Where there was once undisturbed forest, there are now roads with cars and trucks. They not only pollute, but also represent a serious disturbance to the traditional lifestyles of the Maya and the entire ecosystem.

The loss of the rainforest affects all of us around the world. We often don’t realize just how dependent we are on plants for supporting our lifestyle— particularly those plants that grow exclusively in the rainforest. Products such as rubber, oils, fruits, nuts, and chocolate are all harvested commercially from the great biodiversity found in tropical rainforests. Many commercial medicines are made from rainforest plants. The wood and pulp of trees cleared from the rainforest are used for lumber, as well as to make furniture, homes, and paper. Rainforests once covered 14% of the earth’s land surface; now, less than 50 years later, they cover only 6%. Over 150 acres are lost every minute of every day. Experts estimate that every day we also lose 130 species of plants, animals and insects (including species we may not even be aware of!), as they become extinct due to the destruction of rainforest land and habitats.

Our global ecosystem is fragile, and the destruction caused by our machinery, infrastructure, and careless stewardship have created serious ecological problems worldwide. Glee Gum alone is not going to prevent the massive destruction in the rainforest, but there are lots of other companies and organizations dedicated to sustainable product development. There are many ways of making small changes in our lives that, in the long run, can help to alter the helter-skelter course we are on now. Below are links to other websites about rainforest conservation, sustainable development, and other sustainable products. By living thoughtful, responsible lives, we can make a difference. And on that note, we’re going to climb off our soapbox and pop a piece of Glee Gum.

Other Ways To Help Protect The Rainforest