Our Make Your Own Chocolate Kit can be a terrific, interactive classroom activity for a wide range of ages and class sizes. We provide a sample lesson plan intended for grades 5 – 8, but the kit may be used with children from age 5 up, with adult supervision. It has also been used to great effect with high school home economics classes as a fun end-of-term project.

The Chocolate Kit relates to many topics, including Mesoamerican history, rainforest ecology, social sciences, geography, and more. We recommend using the kit in conjunction with the sample lesson plan below, or creating your own lesson plan from the resources provided. You can also find more info and ideas on our Learn More page. 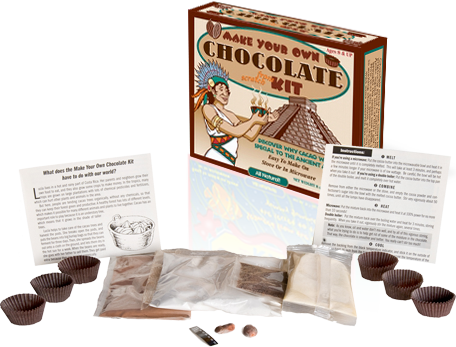 I. Guide to using the Make Your Own Chocolate Kit with a group

Because this activity requires heat, a stove or microwave is required. You will also need a glass bowl or double boiler, spoons, pot holder, and a refrigerator if available; you may also use extra ingredients such as nuts or fruit to make your own personalized chocolate candies.

The Chocolate Kit makes approximately 20 pieces of chocolate, so one kit is plenty for groups of up to 20 students. We recommend that the teacher or group leader heat the ingredients, and allow the students to help stir, temper, and add other ingredients to their chocolates. Older students may be allowed to work in groups to make the chocolate themselves, if appropriate.

II. Sample Lesson Plan for Make Your Own Chocolate Kit

Description:
Students learn about Mesoamerican history in a unique way as they explore the history of chocolate both as a crop and as a food product. Also touches on issues of global trade, European history, and natural resources.

Background:
The history of chocolate is in many ways the history of the Americas. All of the great Mesoamerican civilizations were known to have used cacao beans and to have consumed some form of chocolate.

Olmecs: The first known group to grow the cocoa plant as a domestic crop was the Olmec Indians of Southern Mexico, whose civilization flourished from 1200 BC to 400 BC, and who are thought to be the progenitors of later Mesoamerican civilizations the Maya and Aztecs.

Maya: During the Mayan civilization (AD 250 – 900), cocoa beans were consumed by most of the population, as an unsweetened cocoa drink made from ground beans. This drink would not taste very good to those of us used to chocolate today! The Mayans were the first known society to have created cocoa plantations to grow very large quantities of the crop. Elite Mayans drank their chocolate from elaborate vessels, and chocolate played a role in royal and religious events, even in marriage ceremonies.

Aztecs: The Aztecs copied the unsweetened liquid cocoa drink from the Mayans, calling it “xocolatl” (pronouned “ho-co-la-tol”), meaning “bitter liquid”. Xocolatl was made from cocoa beans, water and sometimes, spicy peppers, vanilla, or other flavorings. Montezuma, the last king of the Aztecs, was known to have drunk as many as 50 pitchers of the drink a day! The Aztecs told this legend about the origin of cocoa: Their god, Quetzacoatl, brought the cacao tree from paradise to earth, traveling on a beam of the Morning Star. He gave the tree as an offering to the people, and they learned how to roast and grind its beans into a paste. They believed that it brought wisdom and knowledge to those who drank it.

Europeans: When the first Spanish soldiers came to the Mexico in the 1500s, they found the Aztecs drinking xocolatl and brought the drink back to Europe. Because Europeans found the liquid too bitter, they added vanilla and sugar. The Spanish guarded the secret of where this delicious drink came from, growing it on plantations in their colonies. Drinking hot chocolate became wildly popular in Europe. Chocolate as we know it came into existence after 1828, when Dutch chemist Conrad Van Houten invented the chocolate press, which separates raw cocoa into cocoa butter and cocoa powder, making a much tastier finished product. The rest, as they say, is history!

Cocoa has grown from being a small domestic crop grown by the Olmecs in a region of Central America to a worldwide cash crop. Annual cocoa production is now around 3 million tons, grown by 5 – 6 million cocoa farmers on four continents (North America, South America, Africa and Asia).

Procedure:
Discuss this history with your students. Have your students create a timeline beginning with the Olmecs and continuing through the present day. Chart the history of chocolate both as a crop and as a food product throughout the years. Have your students research more about the history of chocolate (using the linked websites as resources) and add this information to the timeline. Using a world map, have the students chart the places where cocoa has historically been grown and consumed. Using different colors for different time periods, chart the changes in where cocoa has been grown and consumed worldwide.

Explain the Aztec myth to your students. Have the students think about the cultural significance of chocolate to the Aztecs. Ask them whether chocolate has always been eaten and used and thought about in the same way throughout history. Why might the Aztecs consider chocolate to be a gift from their gods?

Now tell your students that they are going to see firsthand how chocolate is made from the raw ingredients cocoa butter, cocoa powder and sugar. Explain that cocoa butter and powder are the fats and the solids, respectively, of the cocoa plant. Using the Make Your Own Chocolate Kit, have the students work in teams of 5 to make their own chocolate according to the instructions. Alternately, the teacher may do all of the steps involving heat and have the students take turns helping to stir. Give each student a paper liner and have them place things – nuts, raisins, marshmallows, etc. in it to their liking, then spoon the warm chocolate in on top to make their own piece of candy.

Assessment:
Have the students write their own modern-day myths about the origin of foods they enjoy. Use the Aztec myth of chocolate as a jumping-off point. As a class, discuss the significance of myths and why ancient cultures told myths to understand their world.

http://www.rainforest-alliance.org/education.cfm?id=third_l4
Includes linked lesson plans on rainforests, their human inhabitants, and the foods they produce. Excellent lesson on the Chachi Indigenous group and their cultivation of cocoa. Great resources, including firsthand stories of kids who live in cocoa-producing rainforest areas.

http://www.lessonplanspage.com/ScienceMDChangeMatterChocolate57.htm
A lesson that uses chocolate-making to demonstrate the phases of matter, excellent for use with the Make Your Own Chocolate Kit.

• Please read through all instructions before beginning.
• Allow students to observe the cocoa beans and explain that the cocoa powder and cocoa butter are the solids and the oils separated out from the cocoa bean.
• Check with parents to make sure all children are allowed to eat the final product.
• If the chocolate seems to be taking a long time to cool, the temperature indicator is not broken – it simply won’t read any temperature outside of its range. Place the chocolate in the refrigerator for short amounts of time and keep a close eye on its temperature.
• Have fun!