THE CHEWING GUM OF THE AMERICAS, FROM THE ANCIENT MAYA TO WILLIAM WRIGLEY

By Jennifer P. Matthews The University of Arizon Press, 2009 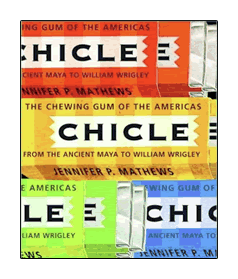 Although Juicy Fruit gum was introduced to North Americans in 1893, Native Americans in Mesoamerica were chewing gum thousands of years earlier. And although in the last decade biographies have been devoted to salt, spices, chocolate, coffee, and other staples of modern life, until now there has never been a full history of chewing gum. Chicle is a history in four acts, all of them focused on the sticky white substance that seeps from the sapodilla tree when its bark is cut. First, Jennifer Mathews recounts the story of chicle and its earliest-known adherents, the Maya and Aztecs. Second, with the assistance of botanist Gillian Schultz, Mathews examines the sapodilla tree itself, an extraordinarily hardy plant that is native only to Mesoamerica and the Caribbean. Third, Mathews presents the fascinating story of the chicle and chewing gum industry over the last hundred plus years, a tale (like so many twentieth-century tales) of greed, growth, and collapse. In closing, Mathews considers the plight of the chicleros, the extractors who often work by themselves tapping trees deep in the forests, and how they have emerged as icons of local pop cultureportrayed as fearless, hard-drinking brawlers, people to be respected as well as feared. Before Dentyne and Chiclets, before bubble gum comic strips and the Doublemint twins, there was gum, oozing from jungle trees like melting candle wax under the slash of a machete. Chicle tells us everything that happened next. It is a spellbinding story.

Have a question? Interested in a topic? Want to see more fun projects, or share a pic or story?

Reach out to us and get featured in our next post!